skip to main | skip to sidebar

Authors in the Spotlight 10/19

In today's Authors in the Spotlight, we have author Jen Selinsky! 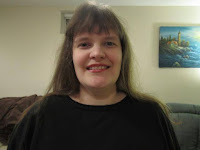 How long have you been published? My first book, Opening the Doors, was published in 2001. But my first work I ever had published was a Back to the Future fanfic story, which was featured in the fan club newsletter in 1993.

What's the best part about being published? The best thing about being published is the sense of accomplishment I feel when I finally finish a work. I also enjoy the fact that people can see my name attached to so many titles. It makes me feel great when some of them purchase my work.

Are you self published or did you go through a publishing company? My first 170+ books are self-published, and my six children’s books are published by Pen It! Publications. Most of those will also be made into coloring books!

*What are the highs, if any? The highs include people inviting me to speak at events and sell my books. Five-star reviews are also good because they tell me that a certain reader enjoyed my work!

*What are the lows, if any? The lows include bouts of disappointment when I don’t think that my work generates as much interest as I think it should. Sometimes, I also get overwhelmed and burned out.

What is the name of your book(s)? My first book is called Opening the Doors. Beyond that, people will have to search by my name, because there are too many to list here.

Was it/were they an easy write for you? Poetry is easy for me to write. I’ve written so many poems over the years that it almost comes as naturally as breathing.

Where can interested readers purchase their copy of your book(s)? My work can be purchased from the following sites: Lulu, Amazon, Barnes & Noble, Kobo, iTunes, Smashwords, Pen It! Publications, and Books-a-Million, as well as many others.

*Is there a tentative release date? I’m not sure of any actual release dates, but I anticipate my fifth children’s book, Me & Mommy, to come out sometime in October.

Join me next week as I bring you more authors!